It’s with lots of emotion that I say that Chapter 11 is the final chapter of Henri’s Secret!!!

I hope that you’ll like it, and that it ends the Henri and Lyla’s story as it deserves to end <3
I’ve been working on this story for over 2 years. I’ve been thinking about Lyla, Henri, Jay and all the others constantly

And of course, it’s been over a year that my team has been working hard on Henri’s Secret.
Such a wonderful team that I can’t thank enough! Thank you with all my heart! <3

Maybe one day Henri’s Secret will have a sequel… Who knows? If the game works, we’ll be able to continue the adventure! I would really love that!
I’ve already written so much… That I think you’ll like! But game developement is such a large and long project that requires a lot of resources… I’ll keep my fingers crossed! <3

Careful! Spoil for those who haven’t finished chapter 10!

Now, I’m going to talk about my reactions about episode 10! <3

A veeeeery difficult chapter to write, mentally speaking because of Lyla’s sadness.
I felt just like her as I was writing (I think I’m too invested in the story when I write XD.)

How could Lyla forgive Henri? What should he do so she would forgive him?
It was obvious to me… He doesn’t need to do anything because Lyla needed to forgive him on her own. And that is what she did during 7 days. Every day, she understood things about the situation, about her feelings… She realizes she loves Henri, even with his mistakes and weaknesses, his pains… That’s how things are and she can’t change that. So she forgives him. Because still trusts him…
Lyla accepts Henri as he is.

The song “ 7 days” is really there to end this final step in the relationship.
(Plus I wrote some of the song myself!)
Yes, it was Charly Sahona, the singer, and I who wrote the lyrics of all of Jay’s songs (more him than me)
In this chapter, I love the solidarity between the characters. Alex and how he is with his sister… Lyla’s family who supports her, and of course her friends! And even Melanie lol.

Chapter Resume:
After 7 long days, Henri and I are finally reunited. We are happy to be able to find our daily life, with our friends… Even if everything is different! Because our high school years are over and the BAC results will be here soon!

Henri’s Secret is also available on your IOS and Android mobile devices! 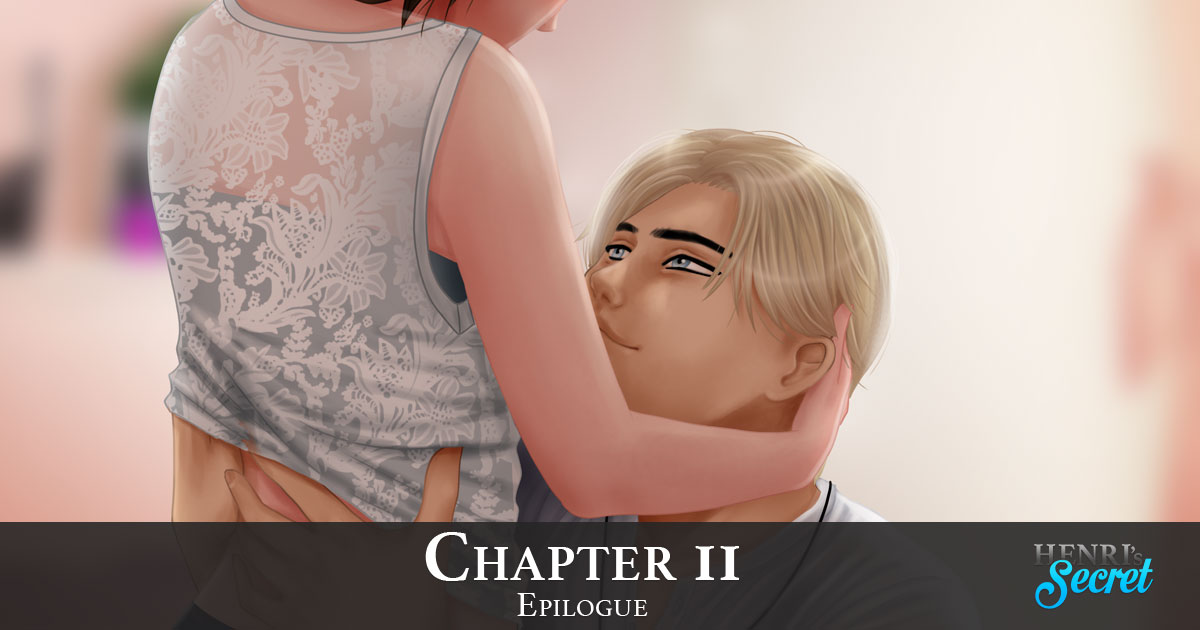 Finally! I've been looking forward to play the 11th for a long, long time. I could write that I hope it would be great, but I just  know that it is, like every chapter so far

.
I'm quite sad (or maybe a little dissapointed) it's the final chapter of HS. I really liked this game, enjoyed playing it and laughed frankly at Lyla&Henry's story. Maybe at first I wasn't so into game's grathic design, I got used to it. What's more,  interesting plot and gorgeous ilustrations totally convinced me to keep playing it. So I hope there will be some sequel, sooner or later

(Sorry for mistakes, eng is not my mother language

oh my gosh! it was so amazing thank you nine and team and congratulations for such and amazing work <3

please please make a sequel! This game is the best I played

I can't believe that the game ended and that over a year has passed since the release.
But it's good - something ends, something begins. I can't wait for your future works

Thank you for the story and the wonderful art. It will be fun to see if there are any other holiday side stories or possible sequels. (Only if Lyla and Henri want their story continued, of course) Since characters can "speak" to their creators after a fashion, I hope they continue to speak to you in some fashion.

At first I've been lukewarm about this story. I was like: "It's obvious what's gonna happen..." But while reading it I've fallen in love and immensely enjoyed it so far. The story progresses naturally and warmly. Not to mention the beauty of the graphics - in general it's gorgeous, but at some points it's not only that but also jaw-dropping.

Hopefully many more skeptics like me will change their opinion about the story because it's truly enjoyable and dreamy.

Thank you for this story. And I hope you'll continue enjoying the presence of Lyla and Henri in your mind, dropping by and adding little bits of their story when they feel like it. Paper people do that, drop by unannounced and take you on an emotional rollercoaster.

Thank you so much for creating this story. Lyla's and Henri's story has been so enjoyable to be a part of <3

Sad that it comes to an end, but it's such a lovely story and ending. I'm not normally into things like this, but I just got so immersed into the story, laughed and shouted and even cried. Even though I wish there would be more, it ended perfectly. Will definitely recommend and will follow and play anything else you create. It's such a beautiful story that captured my heart. Thank you to all who worked on and made it happen for sharing this wonderful story.

Well it was a good run while it lasted, I am thinking about all the time I have spent playing the game and can't actually believe it's been this long, however, I am not going to lie, while I did enjoy it at the same time I wished that some events were better handled, more side-characters maybe, a lot could have been added and the nemesis characters could have been more than just flat characters, at the end, the game felt a little lackluster, it was too happy that it became a standard and didn't really get that satisfaction I would otherwise upon finishing a work of fiction, after everything is resolved and there's no dilemma long.

What I give the game points for is how it tried to avoid all cliche-troops, that made it fresh and unique, I still rolled my eyes at how 'clingy' and the thousands dialogues of Lyla saying she'll miss Henri when he's in the same room with her, it felt out of place and emotionless due to how repeated it was. The dialogue could have been better.

TL;Dr
Plot: 5/10 not representing any novelty but it's not a bad thing
characters: 9/10 I loved Lyla (before she became obsessed with Henri and all she could talk about was Henri) the rest of her friends and even brother all had unique strong characteristics, loved it.
ending 4/10 though happy I still felt empty on the inside because there was nothing heart wrenching or a ground breaking conclusion, I get that the game isn't technically over but that's how I feel about things now
Art: 6/10 (illustrations) I had a super huge problem with the way eyebrows were handled, lol, I liked the art at first but towards the end the illustrations weren't as high in quality, I felt they were being rushed and every character looked different than it did in the previous illustration, while I appreciate the effort of all the artists involved I still wished for a sense of unity
9/10 for the models and the backgrounds, I don't need to explain, beautiful character design.

events: 5/10 the only issue is the short time it took to gloss over each event, it could have been more subtle and more stressful to make sure the readers were 100% invested and to also make sure they left an everlasting effect on them.
Dialogue: 6/10 I am little torn because the early chapters were great but as we gradually neared the end everything was going downhill, the dialogues were repeated, pointless and way too explanatory of something that the readers could figure on their own, I wished there were more than one perspective, not just Lyla or Henri's, it would have added more variety for sure.

Finally, I am very glad Nine decided to make this a free work, it definitely shows her passion and love for this project alongside her team, I am intrigued as to what she can come up with in the future and I will make sure to take inspiration from her for my own projects!
Thank you for this experience! it was most certainly enjoyable.

Finally I finished this last chapter and I must say that I'm really happy but also a bit sad to see this story end.

I liked the story and enjoyed it a lot. Even though it was a predictable setting not once I felt bored or not interested in continuing. The characters were great too, I liked all the main characters a lot. They had different and nice personalities and they felt like real characters to me. I liked the character development as well and it was so nice to see Henri open up to others.
The art and game models were beautiful, I really liked the character design. Henri and Lyla looked gorgeous. And especially Henri in his "true form", so handsome. I have to agree with Jhin on the illustrations. In the beginning they looked very nice but later on I noticed myself not liking them that much. Especially the last illustration wasn't to my liking. But overall they were very nice. I liked the more realistic type of style they had (comparing to MyCandyLove and Eldarya).

I also have to give credit about the length of the scenes. Even though they can never be too long, lol, I was happy to see that the scenes weren't too short either. I've had bad experiences with visual novels were the scenes were ridiculously short and at first I was a bit worried if it would be the case here too. But luckily it wasn't.

One proper complaint I have is about the language. I noticed quite a few typos and other problems with the translation, in the earlier episodes there even were some parts completely in French still. In hurry it's easy to miss some things but good quality in text is also an important part in enjoyment of the game. At least for me, because I usually get caught up very easily in any problems in the text.

Overall, I really enjoyed Henri's Secret a lot. Thank you very much for making this game and I hope we'll see more visual novels from Beemoov in the future. I'll be surely trying them out. <3

Thank you, for a perfect game like this! I really loved playing Henri's Secret and I just loved the story

Like other players have said here; I really REALLY hope that you make sequel :3
After chapter 11 I was like: "Oh, what's going to happen next!?" And then got shocked because of the End part

I was almost going to cry, but then I noticed that I still haven't played the Christmas spin-off, so I'm going to save it closer to December to play it on my birthday